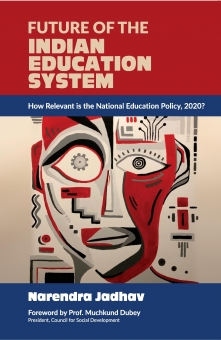 This is probably the first book on the Indian Education System after the announcement of the National Education Policy, 2020 on 29 July 2020.

The Education System in India is easily one of the largest in the world. Fortuitously available Demographic Dividend to India must be harnessed or else there is a risk of a demographic disaster. This calls for concerted efforts to reform the Education and Skill Development sector in India.

This book attempts to analyse this issue in four parts. Part One presents the analytical foundation and various dimensions of the Indian Education System. This includes a detailed analysis of India's educational attainments, an assessment of the current state of preparedness in India for harnessing and leveraging the demographic dividend and as a corollary, identification of gaps in terms of key indicators for an inclusive and equitable growth and development of India's Education sector. Part Two brings together all major proposals put forth in the draft New Education Policy, 2019. Against that backdrop, Part Three presents a comprehensive, critical and constructive appraisal of the New Education Policy and Part Four provides a way forward in terms of a Programme of Action.

A Postscript has been added which draws a comparison between Draft NEP 2019 and NEP 2020. It not only offers an in-depth analysis of the additions, deletions and modifications therein, but also identifies the critical conditions under which the NEP 2020 could possibly be laying the foundation of New India of the 21st century.

Dr Narendra Jadhav is a Member of Parliament, Rajya Sabha (nominated by the President of India). Professionally, Dr Jadhav is an Economist, Educationist, Academic, Administrator and Author (in English, Marathi and Hindi).

As an Independent MP, Dr Jadhav has carved out a distinct place for himself through his studious interventions in the House and while serving on various Standing Committees (Finance and IT) and Consultative Committees (External Affairs).

Holding a PhD in Economics from Indiana University, USA, Dr Jadhav has had an outstanding professional career spanning over four decades in public service. Some of the distinguished positions held by him with distinction include Member, Planning Commission; Vice-Chancellor of Savitribai Phule Pune University; Adviser, International Monetary Fund, and Chief Economist, Reserve Bank of India. Dr Jadhav recently also served as the Chairman, Advisory Committee on RBI History: Volume V (1977-2007).

Dr Jadhav is currently a Visiting Professor at Ashoka University, and a Master in Masters' Union School of Business.

Dr Jadhav is a prolific writer. He has written or edited 41 books-21 in English, 13 in Marathi and 7 in Hindi, besides 31 official reports on various public policy issues. His family biography in English, 'Untouchables' (Simon and Schuster, USA) is an international bestseller, translated into 15 languages, including French, Spanish, Korean and Thai. The Marathi original of this biography, 'Aamcha Baap Aan Amhi' has created history with unprecedented 201 editions. Its Punjabi version received a Sahitya Akademi Award.

A celebrated public figure, Dr Jadhav is recipient of 70 national and international awards for his contribution to the fields of Economics, Education, and Literature. These include four Honorary D.Litt. Degrees and the title of the 'Commander of the Order of Academic Palms' by the Government of France.