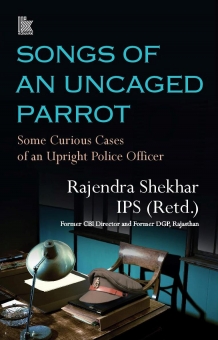 SONGS OF AN UNCAGED PARROT: Some Curious Cases of an Upright Police Officer (Paperback)

Police cases in real life turn out very different from the juicy mysteries that we are used to on the screen and in novels. Or do they?

This compilation of real cases will surprise, delight and enthral you, each one as riveting as any top-class crime mystery and yet, replete with humour. Not only that. Coming from the investigation files of an upright police officer who reached the apex of his career both at the state (Director General of Police, Rajasthan) and at the Centre (Director, CBI), the stories invite a glimpse into the way cases are solved. At the same time, we see not only the rational, but also the emotional and personal side of the author as he does his job: the blood, the sweat and the fears. He narrates how politicians try to cage police officers and make them sing to their tune, and how he as an officer had to courageously take a stand. That’s what makes these songs of an uncaged parrot specially thrilling and poignant.

Rajendra Shekhar did his schooling at Mayo College, Ajmer and postgraduation in Economics at St Stephen’s College, Delhi. He was selected for the Indian Police Service (IPS), Rajasthan cadre, in 1957. As an IPS officer, he had the rare opportunity to learn and serve in a cadre that was among the most sought-after by IPS probationers.

As the Superintendent of Police (SP) of various districts, he learnt to carry out field work of a high quality and then acquired administrative acumen in various high-profile postings at the police headquarters. In 1972, he went on deputation to the Central Bureau of Investigation (CBI) and began his assignment in the CBI as SP (Jaipur Branch). In 1975, he was transferred to Delhi on promotion as the Deputy Inspector General of the CBI. He was in the CBI for about 14 years in different capacities and had the opportunity to supervise many important cases of crime and corruption. Eventually, he went on to successive postings to head, first, the CBI as the Director and then the Rajasthan state police as the Director General of Police.

He retired from service in October 1992. He has written four books, three in English and one in Hindi, namely, Not a Licence to Kill (Konark Publishers, Delhi), Defining Moments (Rupa & Co., Delhi), Memories are Made of This (Notion Press, Chennai) and Pal Ek Pal (Prabhat Prakashan, Delhi), all of which have drawn good reviews and much appreciation.

You can buy the book on Amazon India