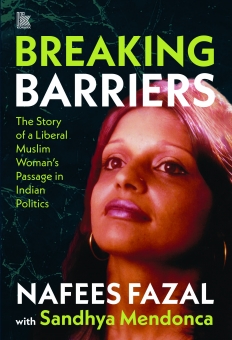 BREAKING BARRIERS: The Story of a Liberal Muslim Woman’s Passage in Indian Politics

By NAFEES FAZAL with Sandhya Mendonca

In this tell-all book, Nafees Fazal, a former minister from Karnataka and the first Muslim woman minister in south India, comes out with remarkable candour about her life—from her troubled childhood, her tumultuous political journey, and her personal beliefs as a modern woman and a devout Muslim who reads the namaz daily. This book is as much about her life as it is about the role of women in Indian politics, especially women from the Minorities. Anyone with an interest in women’s empowerment, the underbelly of Indian politics, the challenges faced by progressive women in politics, and who believes in equality should read this book. Nafees bares the dark and sunny sides of her life and her political views with forthrightness.

From encounters with godmen to escapades in train compartments, through riots, emotional trauma and a rolling pin-wielding mother-in-law, and more, Nafees recounts her story in an engaging narrative.

NAFEES FAZAL is the first Muslim woman minister from South India. As Minister in the Government of Karnataka, she held various portfolios such as Medical Education, Science & Technology and Indian System of Medicine, and Karnataka Urban Infrastructure Finance Development Corporation. She was a Member of the Karnataka Legislative Council (MLC) for 12 years. She is a philanthropist and involved in social work, especially in the areas of education and health.

SANDHYA MENDONCA is an author, a journalist-turned-media entrepreneur, and a cultural evangelist. She is the founder & chief editor of Raintree Media and the founder/festival director of India’s first multi-arts women’s cultural festival, ‘Under the Raintree’. She has several noteworthy books to her credit including Disrupt & Conquer: How TTK Prestige Became a Billion Dollar Company and Reva EV: India’s Green Gift to the World.

You can buy the book on Amazon India